There was an accident at the Red River Gorge where a climber fell going to the second bolt and the rope was cut completely through by the fixed draw's sharp-edged, rope-end carabiner.

There was an accident a few weeks ago at the Red River Gorge where a climber fell going to the second bolt and the rope was cut completely through by the fixed draw's sharp-edged, rope-end biner at the first bolt.

If you recall the previous testing and commentary on this subject, I had stated that I'd only seen ropes getting "sheathed" by sharp-edged biners—usually mid-route—and subsequently learned of an accident in the Czech Republic (in a climbing gym) where the rope-grooved sharp biner (also at the first bolt) severed the rope completely, resulting in the climber hitting the ground.  Luckily in both cases, the climbers were not badly injured. 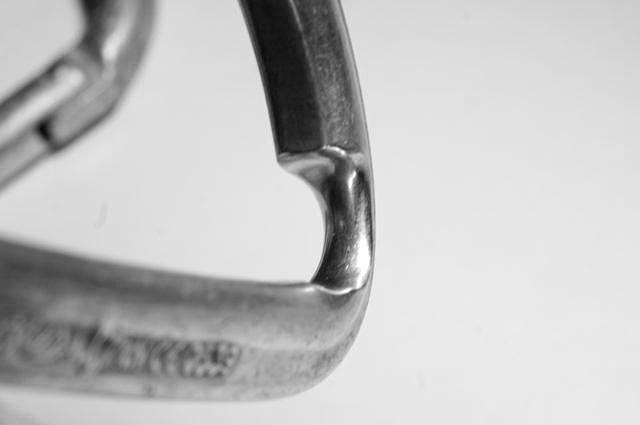 Which biners get badly grooved and why?

From my experience falling all over routes, all over the county, I've noticed three primary locations where fixed biners become badly grooved:

1)    First Bolt
Belayers typically stand too far away from the wall.  This results in a sharp angle in the rope from the belayer to the first biner and then up the route.  When lowering a climber, the rope, often dirty and gritty, slowly wears a groove in the biner.  Both incidents I've heard of where the rope was cut completely, it was the first bolt that was the culprit.
2)    Crux Bolt
Many climbers being lowered off the same biner (falling at the crux onto the same bolt).  This has the same effect as above.  The sharp angle of the rope wrapping around the biner and the weight of the climber being lowered is what is allowing the rope to slowly cut through the biner.
3)    Out of line bolts
Often if the bolt line isn't straight, an out-of-line biner can end up being grooved.  Once again, this is caused by the rope and its angle running over the biner surface.

We'd done some testing before, but decided to do one more super quick test in our drop tower just to see what it would take to cut a rope on a sharp-edged biner in a harsh, but realistic, loading scenario.

Once again, what does this mean?  What does 7 kN actually mean at the piece of protection?  What does it mean to you, the gear and the rope?

Well, 7 kN falls can and do happen in the field.  These can occur:

The climber usually "feels" these sorts of falls.  Your kidneys take a beating, your hips are sore, and your feet may even hurt from slamming into the wall.  I've seen many a climber take a harsh fall low on the route—it's usually followed by a deep grunt and "lower me".

The reality is these sorts of harsh falls low on a route with a sharp biner in play and the rope running over its sharp edge at angle (belayer standing away from the wall) can, and obviously have, resulted in damaging and even cutting the rope.

Now I don't want to get into some ethical debate on whether routes should be left with fixed draws or not.  The bottom line is you can do a few things to reduce the impact on fixed gear:

And of course, it's in everyone's best interest to replace worn and tattered fixed gear.

Be careful out there
KP